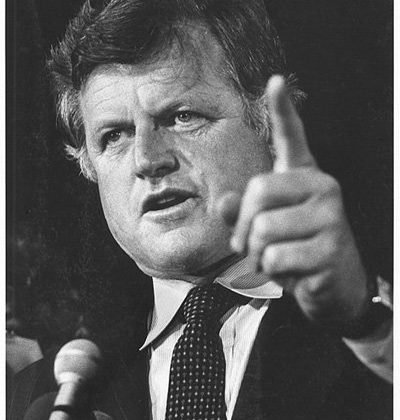 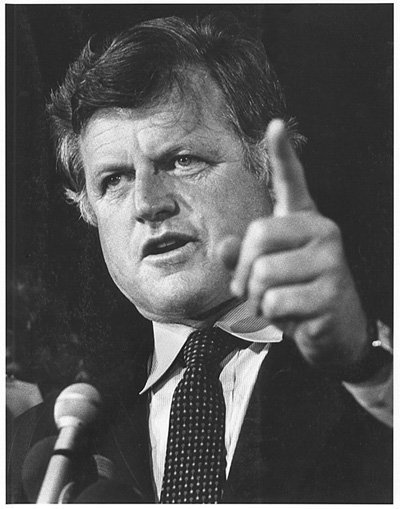 I was raised on Camelot, even though I was born during the LBJ administration. My father was in his early twenties when JFK was assassinated. When I was a kid he used to tell me how he heard about the assassination while working on a roof somewhere in north Jersey. My grandparents on my father’s side were Italian Catholic working class Democrats. The Kennedy’s were not Italian, but they were close enough. As a kid I was intrigued with Kennedy counterfactuals. “What if” JFK and RFK were not killed? I used to do the math in my head–JFK would have been president from 1960-1968; RFK from 1968-1976; and Ted from 1976-1984. As an eight year old this was the best of all possible political scenarios. I thought it would be cool to have the Kennedys in charge for nearly a quarter of a century. I seemed to have no major qualms about the kind of tyranny often associated with such family dynasties.
During my middle school and high school years I followed closely Ted’s presidential hopes. I remember being very angry at him when I realized that his unacceptable behavior at Chappaquiddick probably cost him the presidency. I remember watching the 1980 Democratic convention and realizing that another Kennedy presidency was just not going to happen.
About six years ago I wrote an op-ed in the Harrisburg Patriot-News (no longer available on-line) reflecting a bit on the way Kennedy applied his Catholic faith to politics. He fought for the poor and the oppressed. He opposed capital punishment. He supported immigration. He demanded universal health care based upon a belief in the human dignity of all. He started his career as an opponent of abortion rights, but like so many Democrats (Jesse Jackson, Dennis Kucinich, Al Gore) he came to believe that the rights of pregnant women were more important than the rights of the unborn. I know this might get me in trouble with some of my readers, but I think that it was abortion where Kennedy departed from the Democratic Party’s political philosophy of fighting for those who could not fight for themselves.
Kennedy was a very flawed individual. In addition to Chappaquiddick there was the drinking, the failed marriage, the use of the Kennedy name to avoid the consequences of his actions (and his extended family’s actions). As I watch the television coverage of Kennedy’s career today I can’t help but wonder if he would be revered as one of America’s greatest senators if he was not a Kennedy.
Some, sadly, may be quietly rejoicing today. Kennedy had many enemies and opponents. Yet despite his flawed character, his moral compass remained strong. He fought to the very end for people like my grandparents–ordinary people who needed a champion. I hope that his dream of universal health care will come true.
Is Kennedy the greatest senator in United States history? Maybe. It is probably too early to tell. But I think we can be safe in saying that he belongs in a senatorial pantheon that includes Clay, Calhoun, Webster, Taft, Thurmond, Byrd, Wagner, and LaFollette.