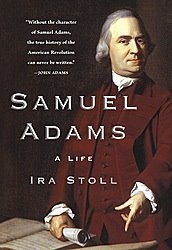 A few years ago I reviewed John Witherspoon and the Founding of the American Republic, Jeffry H. Morrison’s introduction to Witherspoon’s political and moral thought. (BTW, Morrison has new book coming out on the political philosophy of George Washington. I look forward to reading it). One of the things I noted in the review was the difficulty involved in writing a magisterial biography of Witherspoon since most of his personal papers were destroyed, either by Witherspoon himself or during the British assault on the College of New Jersey in the aftermath of the Battle of Princeton.

The same might be said for Samuel Adams. In a June 5, 1817 letter to William Tudor, John Adams described his cousin’s habit of destroying letters:

For fifty years, his pen, his tongue, his activity, were constantly exerted for his country without fee or reward. During that time, he was an almost incessant writer. But where are his writings? Who can collect them? And, if collected, who will ever read them? The letters he wrote and received, where are they? I have seen him, at Mrs. Yard’s in Philadelphia, when he was about to leave Congress, cut up with his scissors whole bundles of letters into atoms that could never be reunited, and throw them out of the window, to be scattered by the winds. This was in summer, when he had no fire; in winter he threw whole handfuls into the fire. As we were on terms of perfect intimacy, I have joked him, perhaps rudely, upon his anxious caution. His answer was, “Whatever becomes of me, my friends shall never suffer by my negligence.”

Because Samuel did not want his friends to suffer his negligence, a biography of him similar to that of David McCullough on John Adams, or Ronald Chernow on Alexander Hamilton, or Walter Isaacson on Benjamin Franklin–the kind of biographies that influenced Ira Stoll’s Samuel Adams, A Life–is difficult to pull off. This is a book about a political life. As a result, we do not learn much about Samuel’s marriage, his family, his inner character flaws, his friendships, or his tastes in entertainment.

Yet, despite these difficulties, Stoll has produced a very readable and fast-moving study of the man who Edmund Morgan claims did more than any other American to bring on the revolutionary crisis. History buffs, particularly those with a passion for “Founders Chic,” will love this book. Stoll manages to place Samuel Adams back into the pantheon of American revolutionaries and suggests, quite compellingly I might add, that he was more important to the patriot cause than his cousin John.

Stoll centers his biographical narrative around three themes: Samuel the defender of New England’s early history, Samuel the republican critic of wealth and luxury (especially as it related to his love-hate relationship with John Hancock), and, most prominently, Samuel the man of deep evangelical faith. Let me say a few words about the latter.

This book reads like a religious biography of Samuel Adams. His religion permeated every dimension of his life, including his response to the American Revolution. One would be hard pressed to find a Samuel Adams quote about God, Providence, or Jesus Christ that does not appear in this book, even if the inclusion of such quotes detract from the narrative or do not relate directly to the particular topic at hand. On one hand, the proliferation of these quotes reveals Samuel’s propensity to spiritualize almost any issue he came up against. On the other hand, the way these quotes are used in the narrative gives the impression that Stoll may have an agenda beyond just telling the story of Samuel’s life. At times the book reads like one of those spiritual quotation books popular among the defenders of the notion that America was founded as a “Christian nation.”

Stoll’s book reminds me that we still need a scholarly (but readable) religious biography of Samuel Adams–one that delves deeply into the Puritan, evangelical, and republican values that shaped his public life. (I have not read William Fowler’s Samuel Adams: Radical Puritan, but perhaps it does offer a more nuanced view of Samuel’s faith). Samuel Adams, A Life offers a nice readable introduction to a revolutionary hero, but it left me wanting more. Having said that, it will make a nice Christmas gift for the history enthusiast in your life.