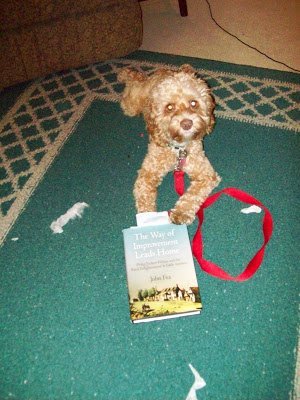 Here are a few things that have caught my eye this week:

Cliopatria Awards for Best History Blogs. How about a nomination? Somebody? Anybody?

Gearing up for the Lincoln Centennial (1809-2009). (Stay tuned for Messiah College’s role in the festivities!). Also, more new books on Lincoln.

A guide to on-line lectures.

Peter Beinert on Sarah Palin and the end of the culture wars.

Boston 1775 on emancipation in the early republic.

An appraisal of the work of Studs Terkel and a thoughtful response from David Sehat at US Intellectual History.

I have always been interested in the life of Samuel Adams and someday thought I might like to write a biography of the man. Here is a review of a recent Adams bio.

Did Alexander Hamilton have a deathbed conversion?

Interesting piece on the end of Vietnam in American politics.

Should Barack Obama get a Cockapoo? Steve Waldman says no. I would have to disagree. Meet Jersey, the Fea family Cockapoo.