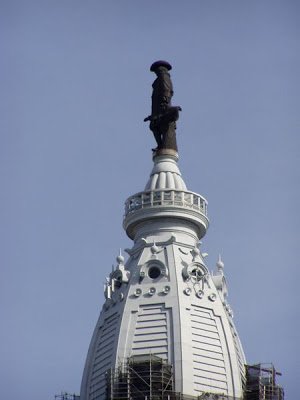 For years there was an unwritten law in Philadelphia that no building in the city could be built higher than the statue of William Penn standing atop City Hall. (left). In 1987, however, this tradition was ignored by the builders of One Liberty Place in Center City. (Liberty Place stands 397 feet taller than the Penn statue). Since then, no Philadelphia sports team has won a major championship. It became known as the “Curse of Billy Penn.”

Well, the Phillies broke the curse tonight with their victory in game five of the World Series. Some say that the curse was broken because the iron workers who built the Comcast Center, the city’s new tallest building. The Comcast Center was completed in 2008, complete with a small figurine (below) of Penn placed on one of the building’s steel girders. The great founder of Pennsylvania’s “Holy Experiment” can once again look down upon his City of Brotherly Love. The curse has been broken. 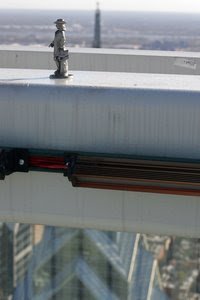