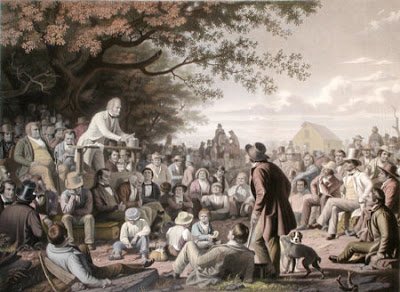 Since most of my students are unfamiliar with this painting, I ask them to tell me what Bigham is portraying. Many of them think this is a scene from an evangelical camp meeting. The speaker is a preacher making an urgent appeal to his audience in an attempt to get them saved.

In reality, this is a picture of a political event. The speaker is a politician making an urgent appeal to win votes. My point, of course, is that there was a great deal of similarity between evangelical revivalism and democratic politics in this period of American history.

I thought about Bigham’s picture today as I watched the Republican National Convention. This was a political rally, but like most political conventions it looked a lot like a religious revival. It was a celebration of American nationalism or what historians and others have described as America’s “civil religion.” McCain was a preacher–extolling American values. Though McCain is a Christian who attends an evangelical church, it was clear that tonight the object of his worship, and the crowd’s worship, was the United States of America. In fact, Sarah Palin has probably been in the midst of similar crowds during her Pentecostal upbringing. The only difference would have been the object of the crowd’s worship.

Listen to these words:

I fell in love with my country when I was a prisoner in someone else’s. I loved it not just for the many comforts of life here. I loved it for its decency, for its faith in the wisdom, justice, and goodness of its people. I loved it because it was not just a place, but an idea, a cause worth fighting for. I was never the same again; I wasn’t my own man anymore; I was my country’s.

This sure sounds like a testimony of conversion to me. McCain was “saved” by his country and he was “never the same again.” He would now live his life for his country. His life was not his own. He would live a life of American sanctification.

(As I argue in The Way of Improvement Leads Home, Philip Vickers Fithian had a similar “conversion” to American ideals).

This sort of nation worship was also relevant in the final minutes of the speech when McCain raised his voice and spoke over the roaring crowd in short exhortations, challenging his fellow Republicans to serve their country. If there was ever an example of country-worship, this was it. If you watched this with the sound muted, and did not know what was going on, this event could have passed for a Christian revival meeting.

Of course the same thing might also be said about what happened last week among the thousands of people in Mile High Stadium.

Perhaps future history teachers will use conventions like this with their students in the same way that I use Bigham with mine.